Carbon neutrality requires systematic transformations and revolutions of both energy and metal systems.

Countries, cities, and companies across the world are pledging to become carbon neutral within the next few decades. These will evoke a systematic transformation in all industrial and service sectors, in which the low-carbon transition in the energy system is regarded as the key strategy. Thus, photovoltaics, wind turbines, electric vehicles, fuel cells, and other key infrastructures must be deployed on a large scale to achieve a carbon-neutral target.

Such a low-carbon transition will not be possible without metals and minerals. Compared with the conventional technologies, those low-carbon energy technologies are much more metal-intensive (both in quantity and category). For instance, photovoltaic power requires up to 40 times more copper than fossil fuel combustion power, and onshore wind power requires 8-fold that of the mineral requirement of a gas-fired plant of the same capacity. Notably, these low-carbon infrastructures also require large quantities of over 30 types of specialty raw materials (mainly metals), such as rare earths, cobalt, and lithium.

Besides intensifying conflict between the supply and demand for critical metals, a carbon-neutral future also faces other metal-related challenges, like increasing environmental pollution, trade disruption, and geopolitical risks. Besides, the growth of metal production capacity will lead to more energy consumption, carbon dioxide emissions, and other pollutants, resulting in a tighter regulation. Meanwhile, with the expansion of low-carbon technologies, the energy sector will become one of the fastest-growing waste-generating sectors, including used batteries, wind turbine blades, solar panels, and abandoned fossil fuel assets.

“Along with the carbon neutrality campaign, we find it imperative to expand the understanding of researchers and policy-makers on the emerging energy-material-carbon dilemma, meaning that current climate change mitigation policies are bound to boost new and carbon-intensive material consumption and waste generation to support energy low-carbon transition,” says Prof. Wei-Qiang Chen, the corresponding author of a new opinion piece entitled “Carbon neutrality needs a circular metal-energy nexus” just published in Fundemental Research. Wei-Qiang Chen is professor at the Institute of Urban Environment Chinese Academy of Sciences (CAS) in Xiamen, China.

“A carbon-neutral energy system (or carbon-neutral metal system) cannot be achieved without a nexus-based understanding of the energy system and metal system, and incorporating circular economy into carbon neutrality pledge can directly benefit the decarbonization of energy and material systems,” he adds. “Thus, we propose a novel circular metal-energy nexus framework to tackle such a dilemma (see figure below), which helps reduce the critical metal demand, reduce the energy needs, and stimulate new social and economic models which can significantly affect the supply and demand of energy and metal, like sharing economy, industrial symbiosis, and lightweight design.”

Coordination between stakeholders along the material and energy supply chains is urgent and feasible since raw materials and low-carbon technologies are widely traded products under the common climate crisis. Diverse organizations are expected to compile circular economy knowledge and solutions, promote cooperation and reduce conflicts among sectors and regions, and ensure a low-carbon, circular, and stable international business supply chain. 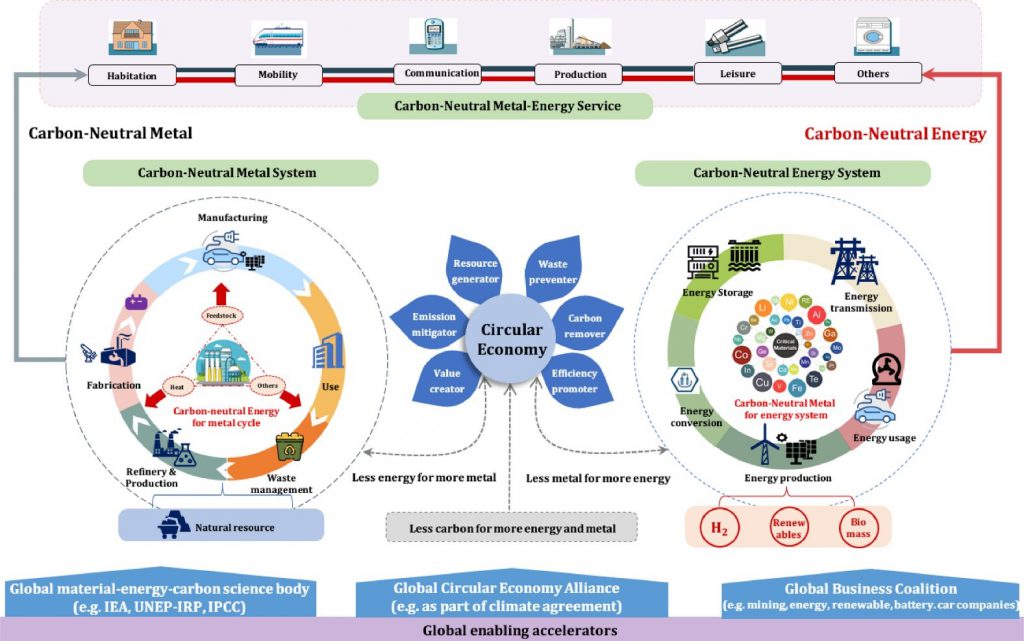