Recycling, re-use, and remanufacturing are central sustainable development strategies. In most cases, they save both: energy and primary resources. There are currently four main indicators to measure the performance of a recycling/re-use/re-manufacturing loop:

The other two metrics characterize the material cycle as a whole:

where P denotes primary material production, Rc_cl the closed-loop recycling flow, and Ri_ol the recycling input from open loop recycling from other product systems. A RC of close to 100% indicates that almost all material consumed was sourced from recycling of old scrap (Os) or new scrap (Ns). RC describes the share of secondary material in flow F2_3 in the system in Fig. 1. Similar indicators can be defined for the share of restored materials and products in other flows, e.g., the final consumption C.

If the share of restored material in total material consumption approaches 1 the material cycles is nearly closed, and primary production is hardly necessary anymore. Reality is far away from that circular economy vision: Globally, in 2005, about 62% of all raw materials processed by the global economy were throughput, and the complement, about 38%, were added to stock, but only about 6.5% of the materials processed stemmed from recycled waste or scrap (Haas et al., 2015). One reason was already mentioned: the low end-of-life recovery rates for many materials. But there is a second reason why material cycles cannot be closed at present: stock expansion.

Stock expansion describes a situation where in-use-stocks of products, buildings, vehicles, and infrastructure grow and the material stocks contained in them grow accordingly. The material demand of growing stocks must be sourced from primary production, as recycling or restoration requires obsolete material from products or buildings that must have been in the stock in the first place. 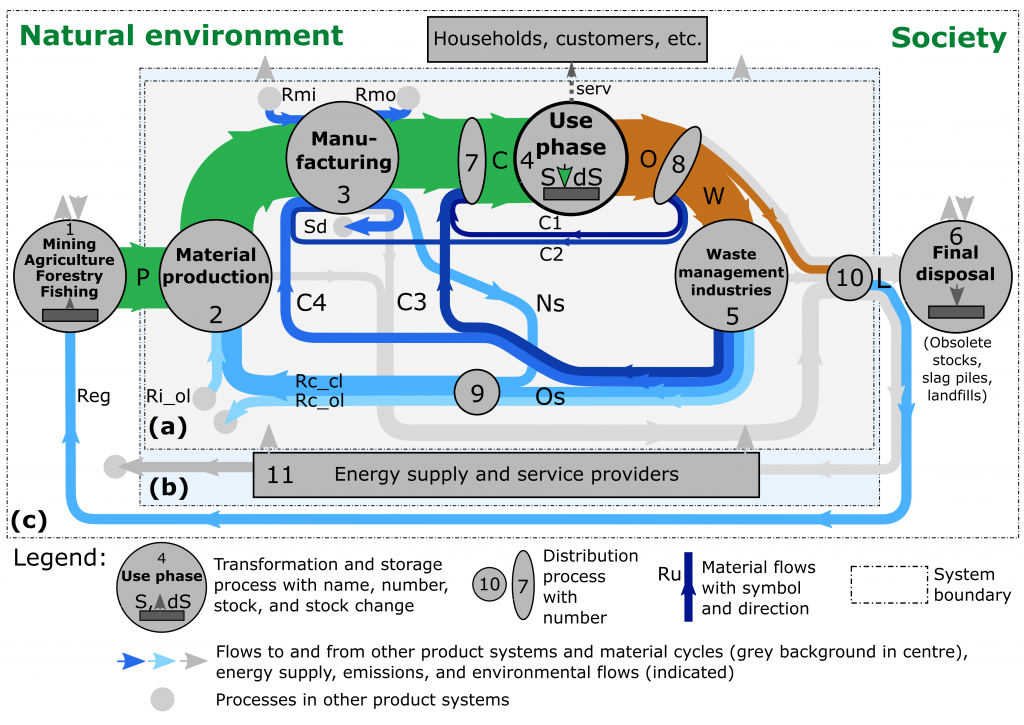 Figure 1: A general system definition of processes and material flows associated with circular economy strategies in a product life cycle or an organization. From Pauliuk (2018), where a detailed figure caption and legend can be found.

To better understand the relevance of stock growth in the development of material cycles over time, stock-based indicators should complement the four circular economy performance indicators listed above. To derive such indicators let’s take a look at the system definition in Figure 1 again. From the use phase, we can read the following mass balance equation:

In words: final material consumption C has two components: stock replacement O and stock expansion dS. Each unit of material consumed either replaces materials in obsolete products (that are hopefully restored) or it contributes to an expansion of the stock. Figure 2a shows an indicator to illustrate this equation: the ratio of stock expansion to final consumption, dS/C. Results for steel clearly show that the less industrialized countries (red group) (I don’t like the term ‘less developed’) use almost their entire steel consumption for stock expansion, and only industrialized countries (green group) have stocks that are mature enough so that steel consumption mostly maintains and does not inflate the stock. The ratio is zero in cases where the stock is constant. In countries where stocks appear to be shrinking, the ratio is negative, meaning that O is larger than C. Note that results in Fig. 2a include trade flows, as they measure apparent steel consumption and EoL steel within the different countries.

Next to the country-level balances of the use phase, there is also the global balance of a material cycle. At the global level there are no links to other countries and product systems, and the balance hence reads:

At the global level primary material production either contributes to stock growth or replaces irrevocable losses. With irrevocable losses I mean material that is actually lost for restoration, such as dissipative losses, obsolete stocks, or slag, in contrast to end-of-life products, which are lost as products but still contain restorable material. This relationship can be plotted for the steel cycle as well (Fig. 2b), showing that between 60 and 80% of the global primary steel production are used for stock expansion. Stock expansion means primary production, which means high emissions and resource use. In fact the share of stock expansion in primary production has actually increased over the last decades, from 60-70% in the 50ies to 73-79% in the period 1998-2008. (Note that equation 4 also applies to near-closed loop recycling systems such as the one for aluminium beverage cans.)

Figure 2: Share of final steel consumption that expands the in-use stock of steel for selected countries, five year moving average (a), and a decomposition of global primary iron production into different loss categories and expansion of stock (b). Data were extracted from Pauliuk et al. (2013), and the figure was taken from Pauliuk (2018).

Surely, stock expansion is an investment that enables future recycling. The question, however, is whether

The latter aspect is of particular relevance for the climate impact of aluminium. What is more important: to mitigate emissions from primary aluminium production now to enable this sector to contribute to global GHG emissions reductions, or to increase aluminium production to substitute steel in passenger vehicles to enable life cycle emissions savings from light-weighting (Modaresi et al., 2014)? That is a current research question and an unresolved policy development issue.

Ever-increasing material stocks are an unsustainable pattern, both form a resource and from a climate perspective. Next to asking “How much can we get?” we should also look into the question “How much do we need?”, a question pertaining to sufficiency. One way of studying this question is to look at the relationship between an indicator describing human development and one describing material consumption or stocks. I replicated an analysis developed by Julia Steinberger and J. Timmons Roberts to check whether there has been decoupling between the Human Development Index (HDI) and steel and cement stocks on the other side. Indeed, Fig. 3a shows that an HDI of 0.8, which was chosen as threshold for a decent life, is linked to ever-decreasing stock levels on average. That means that a certain steel stock level seems to be sufficient for reaching an HDI of 0.8 at the global level, and that the threshold stock level appears to be decreasing over time. Plotting the sufficiency thresholds (the intersections between the colour-plotted regression models with the dashed HDI threshold) over time and comparing them to the actual stock development for steel and cement leads to Fig. 3b. (The regression analysis for cement is not shown here.)

Figure 3: Regression analysis of the relation between the Human Development Index (HDI) and the per capita steel stock (a) and plot and extrapolation of the global sufficiency thresholds (HDI 0.8) for steel stocks derived from plot (a) along with the actual global stock development (b). The method is an exact replication of the analysis of Steinberger and Roberts (2010) for steel and cement stocks. The steel data were taken from Pauliuk et al. (2013), the cement data from Müller et al. (2013). The method and the results for cement can be found in the SI. Figure taken from Pauliuk (2018).

Actual stock levels and sufficiency thresholds may cross during the present decade (we will know in a few years, when new data will be available), which indicates that there is enough steel and cement in the anthroposphere on average. Of course, the HDI threshold of 0.8 is highly speculative and the distribution of stocks is highly unequal. To the poorest and often also most vulnerable societies on this planet the statement that we are fine on average must seem cynical. Nevertheless, related research on material efficiency showed that if industrialized countries start using steel more efficiently, they can reduce their in-use stock levels over time, and the resulting outflow of steel could then be exported to the less industrialized countries to build up steel stocks in construction (Milford et al., 2013). That contraction and convergence of material stocks can help reduce overall environmental impacts while contributing to a more equal global society.

Including material efficiency to the spectrum of climate change mitigation strategies widens our options and makes sustainable development less dependent on risky solutions including nuclear power, carbon capture and storage, and geo-engineering.

Obsolete stocks: Materials in products that are no longer used but not available to waste management either. Obsolete stocks include, for example, old cast iron pipes or copper wires that were never recovered, abandoned buildings, abandoned vehicles, or old electronic devices stored in peoples’ houses.

Closed loop recycling: Situation where recycled material enters the same product type or product group as the one where the scrap originally came from.

Pauliuk, S., 2018. Critical Appraisal of the Circular Economy Standard BS 8001:2017 and a Dashboard of Quantitative System Indicators for its Implementation in Organizations. Resour. Conserv. Recycl. 129, 81–92.